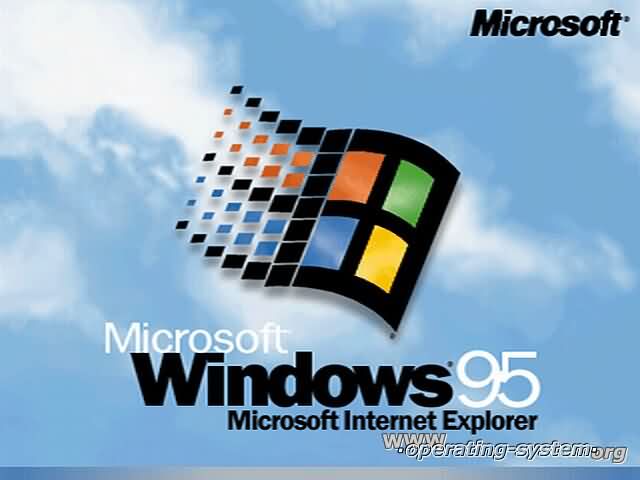 Summary
Windows 95 is a graphical OS is designed for workstations at home or business. While still available, it is getting a bit old. See Windows 98 and Windows Me for later variants of this OS. Over its Windows 3.x predecessor, Windows 95 added Plug and Play, support for 32-bit applications, consolidated registry, improved memory management, and a number of accessories, such as the CD-Player.
News
31-Dec-2002 – Microsoft End of life – no support or online self-help
1-Jan-2001 Volume Licensing to End
In an effort to force corporations to switch to the more expensive Windows 2000, Microsoft announced it is ending volume licensing of both Windows 95 & 98 on June 30, 2001.[Infoworld, Page 15]

No further work is being done on Windows 95 and Microsoft considers it an obsolete OS. Support is no longer available.

Product
Windows 95 OSR2
Processor
386DX or better
RAM
4 MB (8-16 MB recommended)
Drive space
35 MB
Drives
Runs from hard disk, Prompt available from boot diskette.
Video
VGA or better
File systems
FAT(all), FAT32 (OSR2 and later only)
Compatibility
Windows 16-bit programs (Windows 3.x type programs)
Windows 32-bit programs
Windows VxD device drivers
DOS programs, 100% native, while Windows is not running
DOS programs in a “DOS box” while Windows is running, compatibility excellent
DOS device drivers
Interface
Windows is a GUI interface, but supports both a text-based DOS window, and can boot from a single diskette into a “DOS” prompt.
Installation
Must be installed on a primary partition on the first drive. See Secrets section below for complete installations on other than the first drive. About 4 MB of boot up code must reside on the C drive, but all remaining files can be installed in any drive (primary or logical, any physical drive).
Variants

1) Identification of Windows 95 version: Look at the file date and time of the GUI.EXE file in the Windows\system directory (or where you installed windows).

2) Go to “Start”, “Settings”, “Control Panel”. Select the “System” icon. In the General tab (the default), it shows the product “Windows 95” and the version:

The OS Files is a comprehensive portal for operating systems that run on the x86 platform. This portal provides details on various current and future operating systems, current releases, beta releases, older OSes, and discountinued OSes.

Each of the operating systems in this portal covers system requirements, support, news, history, variants, versions, prices, comparisons, secrets, and many more.

Check out a specific OS file for comprehensive information on a particular operating system.