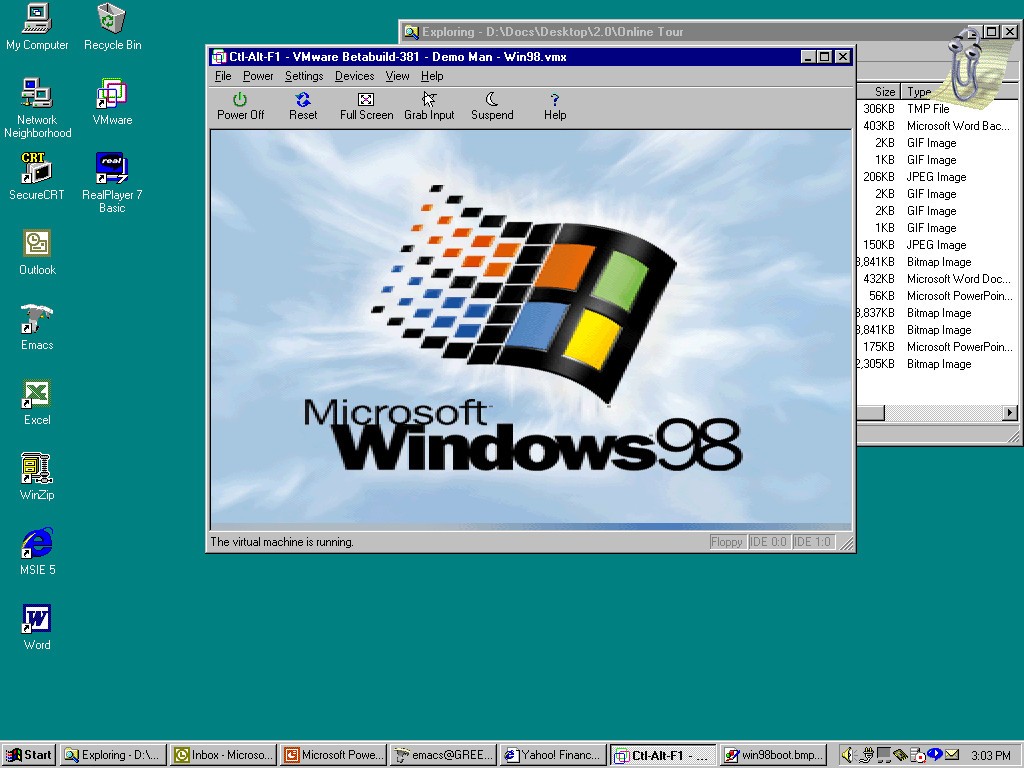 Summary
This Graphical OS is designed for workstations at home or business. Windows 98 likely has the widest hardware and software support of any OS in existence, greatly exceeding even Microsoft’s flagship product Windows 2000. The Windows 9x/Me family is installed on more PCs than all other OSes combined. While not as dramatic a change from Windows 95 as Windows 95 was over Windows 3.x, Windows 98 adds a number of improvements, fixes, and interface tweaks. It now includes the previously separate Windows Plus! Windows 98 Second Edition (SE) added further fixes, updates, improved USB support, drivers, and Y2K updates. Windows Me is the next release in this series.
News

1-Jan-2001 Volume Licensing to End
In an effort to force corporations to switch to the more expensive Windows 2000, Microsoft announced it is ending volume licensing of both Windows 95 & 98 on June 30, 2001.[Infoworld, Page 15]

14-Sep-2000 Windows Me
Microsoft has a replacement for Windows 98, called Windows Millennium also called “Windows Me”. See Windows Me for more details

1-May-2000 Missing Windows CD
Microsoft has changed the OEM policies for including Windows 98 on a new computer. In most cases, to get the OEM pricing, computer manufacturers are not allowed to provide a Windows CD-ROM as has been done in the past. This means if your hard disk is corrupted, you have to buy a new full copy of Windows! Some manufacturers do include a recovery CD-ROM, with some, but not all of Windows files found on a normal Windows install CD. Often these “recovery” CD’s will erase everything and start over with an image of the system as it was first shipped. [InfoWorld Page 101]

Interface
Windows is a GUI interface, but supports both a text-based DOS window, and can boot from a single diskette into a “DOS” prompt.
Installation

For system with more than 512 MB of RAM, to avoid instabilities it is necessary to use run MSCONFIG, select Advanced, and set the option “Limit memory to” on, with a value of 512.

Identification of Windows 98 version: Go to “Start”, “Settings”, “Control Panel”. Select the “System” icon. In the General tab (the default), it shows the product “Windows 98” or “Windows 98 SE”.

Downloads
Upgrade from the first release to the SE (second edition) is only available as a paid release.
Links
Microsoft
WUGNET – Windows User’s Group
Developers
Books
Books on Windows 98
Publisher

The OS Files is a comprehensive portal for operating systems that run on the x86 platform. This portal provides details on various current and future operating systems, current releases, beta releases, older OSes, and discountinued OSes.

Each of the operating systems in this portal covers system requirements, support, news, history, variants, versions, prices, comparisons, secrets, and many more.

Check out a specific OS file for comprehensive information on a particular operating system.